History and development of canning

During the first years of the Napoleonic Wars, the French government offered a hefty cash award of 12,000 francs to any inventor who could devise a cheap and effective method of preserving large amounts of food. The larger armies of the period required increased and regular supplies of quality food. Limited food availability was among the factors limiting military campaigns to the summer and autumn months. In 1809, Nicolas Appert, a French confectioner and brewer, observed that food cooked inside a jar did not spoil unless the seals leaked, and developed a method of sealing food in glass jars.[2] Appert was awarded the prize in 1810 by Count Montelivert, a French minister of the interior.[3] The reason for lack of spoilage was unknown at the time, since it would be another 50 years before Louis Pasteurdemonstrated the role of microbes in food spoilage. 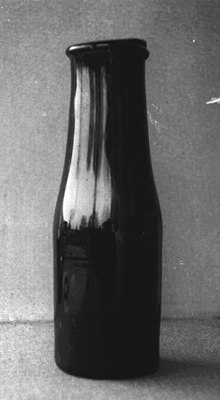 The French Army began experimenting with issuing canned foods to its soldiers, but the slow process of canning foods and the even slower development and transport stages prevented the army from shipping large amounts across the French Empire, and the war ended before the process was perfected. Unfortunately for Appert, the factory which he had built with his prize money was razed in 1814 by Allied soldiers when they entered France.

Following the end of the Napoleonic Wars, the canning process was gradually employed in other European countries and in the US.

In the United Kingdom 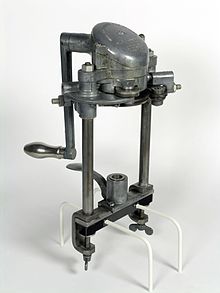 A Dixie Can Sealer for home use. Now in Thinktank, Birmingham Science Museum.

Based on Appert's methods of food preservation, the tin can process was allegedly developed by Frenchman Philippe de Girard, who came to London and used British merchant Peter Durand as an agent to patent his own idea in 1810.[4] Durand did not pursue food canning himself, selling his patent in 1811 to Bryan Donkin and John Hall, who were in business as Donkin Hall and Gamble, of Bermondsey.[5] Bryan Donkin developed the process of packaging food in sealed airtight cans, made of tinned wrought iron. Initially, the canning process was slow and labour-intensive, as each large can had to be hand-made, and took up to six hours to cook, making canned food too expensive for ordinary people.

The main market for the food at this stage was the British Army and Royal Navy. By 1817 Donkin recorded that he had sold £3000 worth of canned meat in six months. In 1824 Sir William Edward Parry took canned beef and pea soup with him on his voyage to the Arctic in HMS Fury, during his search for a northwestern passage to India. In 1829, Admiral Sir James Ross also took canned food to the Arctic, as did Sir John Franklin in 1845.[6] Some of his stores were found by the search expedition led by Captain (later Admiral Sir) Leopold McLintock in 1857. One of these cans was opened in 1939, and was edible and nutritious, though it was not analysed for contamination by the lead solder used in its manufacture.

During the mid-19th century, canned food became a status symbol amongst middle-class households in Europe, being something of a frivolous novelty. Early methods of manufacture employed poisonous lead solder for sealing the cans, which may have worsened the disastrous outcome of the 1845 Franklin expedition to chart and navigate the Northwest Passage.[citation needed][7]

Increasing mechanization of the canning process, coupled with a huge increase in urban populations across Europe, resulted in a rising demand for canned food. A number of inventions and improvements followed, and by the 1860s smaller machine-made steel cans were possible, and the time to cook food in sealed cans had been reduced from around six hours to thirty minutes.

In the United States 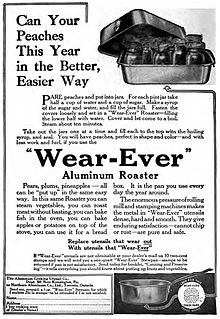 1914 magazine advertisement for cookware with instructions for home canning

Canned food also began to spread beyond Europe — Robert Ayars established the first American canning factory in New York City in 1812, using improved tin-plated wrought-iron cans for preserving oysters, meats, fruits and vegetables. Demand for canned food greatly increased during wars. Large-scale wars in the nineteenth century, such as the Crimean War, American Civil War, and Franco-Prussian War introduced increasing numbers of working-class men to canned food, and allowed canning companies to expand their businesses to meet military demands for non-perishable food, allowing companies to manufacture in bulk and sell to wider civilian markets after wars ended. Urban populations in Victorian Britain demanded ever-increasing quantities of cheap, varied, quality food that they could keep at home without having to go shopping daily. In response, companies such as Underwood, Nestlé, Heinz, and others provided quality canned food for sale to working class city-dwellers. In particular, Crosse and Blackwell took over the concern of Donkin Hall and Gamble. The late 19th century saw the range of canned food available to urban populations greatly increase, as canners competed with each other using novel foodstuffs, highly decorated printed labels, and lower prices.

Demand for canned food skyrocketed during World War I, as military commanders sought vast quantities of cheap, high-caloriefood to feed their millions of soldiers, which could be transported safely, survive trench conditions, and not spoil in transport. Throughout the war, soldiers generally subsisted on low-quality canned foodstuffs, such as the British "Bully Beef" (cheap corned beef), pork and beans, canned sausages, and Maconochies Irish Stew, but by 1916 widespread boredom with cheap canned food amongst soldiers resulted in militaries purchasing better-quality food to improve morale, and the complete meals in a can began to appear. In 1917 the French Army began issuing canned French cuisine, such as coq au vin, Beef Bourguignon and Vichyssoisewhile the Italian Army experimented with canned ravioli, spaghetti bolognese, Minestrone and Pasta e fagioli. Shortages of canned food in the British Army in 1917 led to the government issuing cigarettes and amphetamines to soldiers to suppress their appetites. After the war, companies that had supplied military canned food improved the quality of their goods for civilian sale.